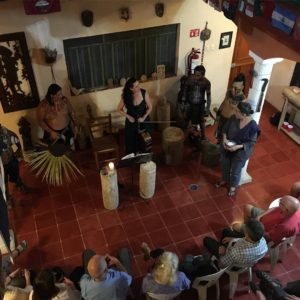 “And now for something completely different!” as soon as the words left my mouth the room was punctuated by the explosive sound of glass breaking on the tile floor. The crowd roared with laughter and one of the kitchen workers scurried to clean up the mess this tipsy ex pat had made with his wine glass. What was “different” was the sacred geometry of Bach, which felt like a medicine of order in this party atmosphere of old hippies in the jungle in the Yucatan. I had been drawn to this Bach medicine as a child in a big family with hippie parents who were always searching and seemed intrigued and enamored with everything exotic and “other. Seeking a belonging to some single tradition, to some ancestral lineage, as well as a physical discipline, classical music held a space for me when my alternative community sought to transform and improve on convention. Also, my Dad is mostly German heritage (later I found out from 23 and me also Polish), and Bach felt right in line with the hard work ethic and a lutheran grandmother. 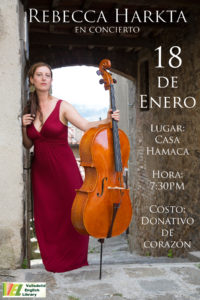 My maternal grandmother had ancestors who came over on the Mayflower, but lived in Mexico for 30 years. We visited her a couple times and my childhood home was decorated with Mexican art. The last time I was in Mexico was in 1997, over 20 years ago, when I was uncertain if I would follow the path of a musician.  So this tour felt like coming home, as there I was in Valladolid, Mexico surrounded by welcoming faces at the Casa Hamaca with the skill to fill the space with patterns and rippling sequences that I had befriended and mastered for decades. The joy in listening was palpable and augmented the joy in my playing. Then, in my emerald silk dress I did something in the company of 80 plus strangers that I had never done before: I allowed myself to take a massive risk and not only improvise at a formal concert, but do so inside a style of music I barely had any experience with and in collaboration with musicians I had met only 15 minutes before the concert. 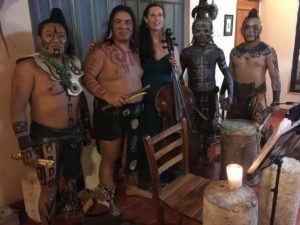 In black face paint, naked from the waist up and carrying drums and flutes, four Mayan musicians (a band called Box Balam pronounced Bosh Balam, meaning Black Jaguar) took the stage alone for several songs, then I joined them, improvising with their melodies and rhythms. The result was one of the most powerful experiences in my many years on stage, not because the music was polished or stunning, but that we in co-existing, had bucked the trend of hundreds of years of colonialism. HCJC6804 Video excerpt click here

On a personal level I had transcended the duality of western thought that had instilled in me the belief that I had to choose classical or folk; convention or innovation; modernity or history; hippies or tradition; me or them. Something shifted in me and something profound healed in the audience. We all felt it. Some woman yelled from the audience in the question and answer that followed the performance “you have quite a powerful voice, lady”. Indeed, this was exactly where I belonged-Bach and Mayan music. 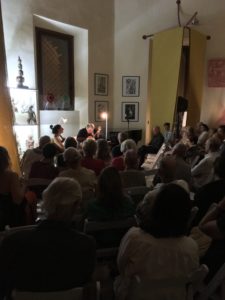 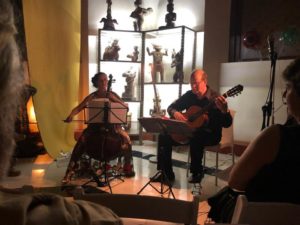 A few days earlier I had played for a crowd of some of the wealthiest and most powerful folks in Merida and the Yucatan. One hundred and twenty seats had sold out and so we added a second night, which was filled with the warmth of artists and friends of the hostess. It was also a magical evening as Jose and I wove together melodies from Brazilian choros, Argentinian Tangos as well as Bach. I was a bit intimidated the first night, not expecting such a prestigious crowd, but still played well and it was well received. By the second night I was filled with pure joy. These composers straddled traditions and struggled to find their belonging, but in making their voice heard, they created a space for seemingly contradictory traditions and cultures to coexist. 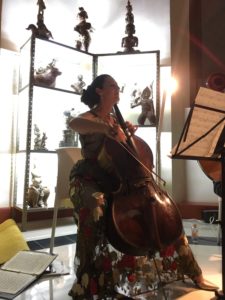 Even in a culturally diverse community such as Mexico, I have been told, the classical music culture has remained mostly entrenched in a narrow range of music, rarely venturing into the 20th century or away from Europe. The immense popularity of our event was due in large part to a hunger for something that embraced and expressed something beyond this narrowness. We also realized that our incredible hostess Leila was very special and at the center of the Yucatan community with her beautiful space she held for art and performance called La Cupula. Inviting her friends meant inviting everybody. She had us stay in one of her vast guest suites, decorated with folk art, and we marveled at the pools and sculptures of jaguars in her gorgeous interior garden. 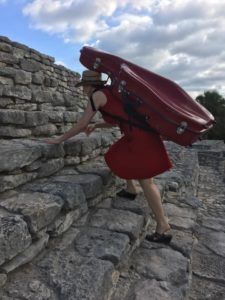 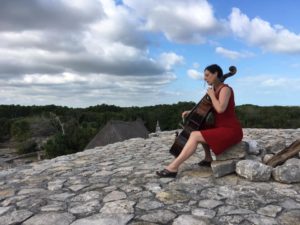 QJQO0290 Video excerpt click here
Between concerts my husband, mom and I climbed the almost completely empty ancient Mayan site of Xkambo (from around 400 AD) and I played to the birds and trees from the amazing view at the top. We ate coconut crusted shrimp, papaya and mangos; collected shells on the beach; waited in line for freshly made tortillas; got lost in tiny towns dodging dogs and speed bumps; and even managed to get stung by a jellyfish while swimming in the ocean. Despite jellyfish and speed bumps, the western part of the Yucatan felt safe and the people were welcoming and warm.

After returning home, skirting the edge of a massive snow storm, I floated on a certain cloud of euphoria for a couple days and then I collapsed with fever, chills, intense back pain, digestive distress. Breathing into my physical distress I began to sob. I realized that while all this belonging, embrace and joy was welcome, it was also a bit frightening and unfamiliar. Here began to emerge an historic pain from decades of struggling to find my place in the world. A long history of not belonging: not belonging, I felt, in the conservatory among lineage classical musicians from the city, folks who had never improvised in their lives or gathered newts from a stream; not belonging in jazz music or celtic music where fiddlers knew thousands of tunes; not belonging in normal society because of my unconventional upbringing; not belonging as a woman in a male dominated field; not belonging to my innate and profound connection to nature as my life took me into cities; not belonging in my nature based spirituality in a rational or christian society.

But somehow, among the chocolate and jaguar sculptures and Bach and mayan music it really sunk in. No, I didn’t ever belong to any of those things or places, I belonged to ALL OF THEM, and also, I belonged to myself. And here I am, with all of these many paths that have led me to exactly this moment, beneath the blood mood eclipse, finding my way home to this truth. I woke up from an illusion of isolation and found myself with skill and joy on stage surrounded by hundreds of listeners playing music that I have always been meant to play. The listeners, composers and my cello woke me up and I woke them up. We are all indigenous to this earth. We all belong.

Remind me of this when I forget again. 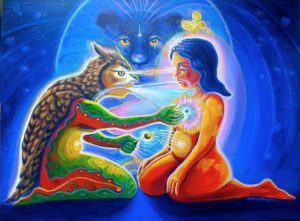 Balam means Jaguar in the Mayan language. The Jaguar is one of the symbols of the “Rainbow Lady’ goddess Ix Chel in the Mayan pantheon. The clothing and art in Mexico sing of this goddess of weaving and colors. The rainbow has all colors and is a marvel to behold, filled with light and illumination, but also with rain, the humility of heaven’s tears. Beneath the sunshine and the rain, in the warm soil of this beautiful earth seeds can burst open and new life can emerge.

A warm thank you to all the wonderful listeners and fascinating people I met, too many to name, but mostly thank you to: Jose and Ingrid Lezcano; Pearl and George Ashley; Leila Voyt; Yannik Piel; Joann and Jim Burns; Tey Mariana Stiteler; Denis Larsen; Ivan Cabaldon; Ronald and Dee Poland; Diana Castillo; and to my husband Wesley Fleming and mom Linda Hartka-Reiss.